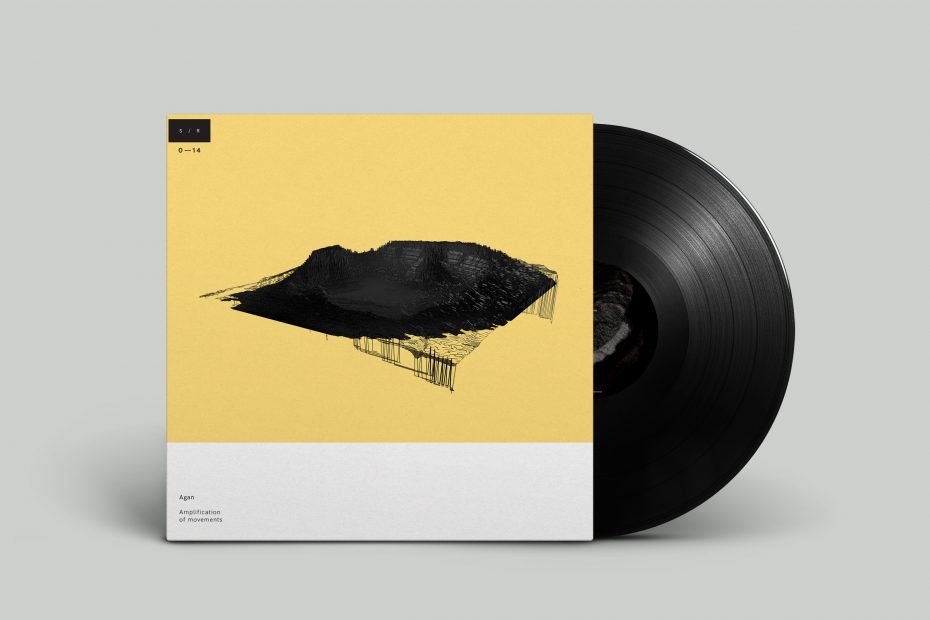 Stochastic Resonance propagate an artistic intent in their music that forms a congruous flow of creative ideas, from live shows to apps through musicians to label/collective and back, forging something significantly their own in a time of consumerist media and perfunctory listening experiences. In a time when the ubiquitous brown, cardboard sleeve containing the latest in Tech-House ritualism saturate the homogenous shelves of gentrified record stores, labels like Stochastic Resonance are essential for the progression and development of music. Together with the likes of Raster Norton, Stroboscopic Artefacts and Semantica, SR offer an alternative to the dull, lifeless landscape of electronic music. It’s music made with an almost militant futurist intent, where the banality of the status quo is an oppressive force made to be destroyed and every release a conceptually driven and intellectually manifested artistic declaration. And it is exactly with this intent that Agan’s Amplification of Movements arrives to on the Italian label.

Amplification of Movements is not merely some hyperbolic extension of the dance floor or the Techno genre, shoehorned into a conceptual framework to lure in the cognitive listener, but rather an album with a strong thematic concept born out of something organic and realised in something abstract.

“The work is inspired by and dedicated to the Natural Reserve of Vico Lake, in Italy” reads the accompanying press sheet. “During a four-year period, from 2012 to 2016, the artist focused on the wildlife of the area in the province of Viterbo, considering it both as an inspiring muse and as an object of study.” What the press release doesn’t mention however is that the release was first imagined in the form of smartphone app, a geo-location creation that would have re-composed said work as you wander around the location. The app was eventually abandoned on this occasion however for “many reasons” says Lorenzo of SR, chief among them “the lake doesn’t have a big influx of visitors, so binding it to a geo-location app wasn’t the smartest thing to do”. This hasn’t completely done away with the idea of a geo-location music app for SR, and establishing it in the foreground of this release has not taken away or added anything in the end-result of the album, but it puts into perspective the kind of intensity and determination the music expresses in the abstract form.

Agan joins the SR collective as something of a satellite figure. It’s a project started by Giuseppe Carlini, a prominent figure in Italy’s electronic music scene since the 90’s best known for his work with Gianclaudio H. Moniri aka KAEBA as PLASTER who have associations with Stroboscopic Artefacts, Touchin’ Bass, SonuoS, Crazy Language and Brainstorm Lab amongst others. Dedicating 4 years of his life to work on Amplification of Movements is no small commitment and that really comes through on this record. Synthesised sounds seem to have matured in a petri dish, taking on an organic dimension that filters into the form of each track as it unfolds from seedling into adulthood. Carlini expounds on slow movements, evocative of a swell on a body of water without ever succumbing to hackneyed repetition and what you feel through the 6 tracks of the album is a very calculated introspective method. Like grains of sand form a picturesque beach view when you pull back to marvel at it in its fullest after the last strands of delay echo out from under Flying in a Blue Dream.

There’s no physical relationship between the music and the concept of the natural reserve behind it, and even if Carlini used found sounds, they are hidden behind an impressive wall of processes that have given them a deserted urban quality. Deserted being the optimal word here, Amplification of Movements is a work based in an Italian minimalist sound aesthetic where diminutive, purposeful forms make bold determined statements. Where less is invariably less, the slightest movement and expression makes a definitive mark in the landscape as disparate parts fall into symbiotic relationships with each other and their enveloping silence. What grows out of nothing returns to nothing in these tracks as they float tentatively around the borders of Ambient Techno, latching on to a new language beyond these defined musical barriers.

A geiger counter ticking out of time with the warm bass rises while the ghostly reverberations of a piano drift like flotsam on a translucent sea of orchestrated sound pieces as atmosphere. When something like a measured percussive beat takes root on a track like Fluid Perceptions, there’s no determinable objective to its presence, sluggishly oozing to life out of a pool of wistful creation like everything around it. Carlini’s music teams with this kind of life, anthropomorphising something in lifeless electronic instruments that create a digitised reflection of the environment the artist refers to in his concept.

Agan’s Amplification of Movement is a work of such insoluble beauty that just keeps revealing some new deeper levels, hidden from the surface upon every listening experience. Only on the third listen, when donning a pair of headphones did I come across, that intermittent piano on Unconscious Connections, leading yet another ghostly trail to some mutated form of its resonances, where some new digital anomaly awaits. Its minimalist form hides a vast expanse of curiosities that keep delivering a new point of reference or a new nucleus that transports the listener into a new musical dimension within the defined and calculated context of the album.

Manage Cookie Consent
To provide the best experiences, we use technologies like cookies to store and/or access device information. Consenting to these technologies will allow us to process data such as browsing behavior or unique IDs on this site. Not consenting or withdrawing consent, may adversely affect certain features and functions.
Gestisci opzioni Gestisci servizi Gestisci fornitori Per saperne di più su questi scopi
View preferences
{title} {title} {title}