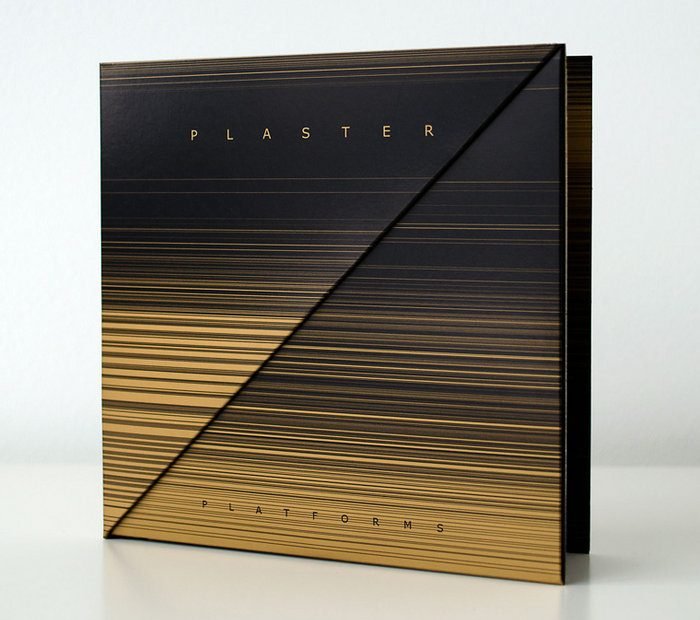 Plaster is a duo of Gianclaudio Hashem Moniri and Giuseppe Carlini founded in Rome in 2008 with two previous album and EP releases on the Ukrainian label Kvitnu. The press release states that they have played alongside artists including Alva Noto, Ryoji Ikeda, Cristian Vogel and Frank Bretschneider. This austere sector of electronica is heavily populated and there’s not much fresh conceptual space into which new contenders can squeeze. Nevertheless, Plaster’s tight and focused sound has managed to insinuate into some narrow crevices of the tightly-packed subgenre. Of those artists it’s Noto and Bretschneider that come to mind most on Platforms. The main difference is not so much in style but in detail: dirtier, rougher tones and some surprisingly anthemic chords are allowed to modify the (in electronica terms) age-old sonic templates.

Following on from the highly cinematic and ominous opener ‘Parallel Segment’, ‘Component’ is very much in the Raster-Noton style, a blend of austere dub and cold tones and seething details that gradually increases in tension and is especially impressive when it drops away to the underlying beat structures.  Structure is somewhere in between Pan Sonic and Raster Noton and is marked by with high, icy chords. ‘Iperstatic’ is possibly the most impressive (though sadly the briefest) track on the album: an ominous radioactive-sounding soundfield that should really have been longer. As it is it’s a tantalising “might have been even better.”

The joker in the pack is ‘Intersection’, a piece of dreamy electronica that is well executed but doesn’t seem to fit that well alongside the other tracks. This surprisingly utopian aspect to Plaster reveals itself more cryptically in ‘Double Connection’ which includes a spoken sentence from Eckhart Tolle‘s spiritual manifesto The Power of Now, which is not the type of reference you normally encounter in this genre.  Luckily it’s a whispered, processed presence, more of a texture than a vocal that doesn’t diminish the ominous power of the track and if it wasn’t mentioned the listener would probably have no idea of the source.

‘Rearline’ introduces a more obvious variation. What begins as a shifting, serrated dub track is gradually infiltrated by (almost too) anthemic chords, suggesting that there may be a slight Detroit influence at work here. ‘Trasversal’ starts with desolate effects and a very heavy icy electro pattern that mutates into a strange avant-garde club hybrid. Eventually there is a mass of uneasy detail strafed by dubstep-like bass flare ups and harsh tones, all of which builds and builds until reaching a sudden dead stop.

The CD concludes with a bonus video called ‘Lydia K’, a coldly lit sequence of an austere and even menacing looking dancer.  The other really impressive aspect of the CD format is the packaging – an intricate card package with a diagonal slit across the front cover designed by Kvitnu label artist Zavoloka. Definitely a release and a label worthy of investigation and support.

Manage Cookie Consent
To provide the best experiences, we use technologies like cookies to store and/or access device information. Consenting to these technologies will allow us to process data such as browsing behavior or unique IDs on this site. Not consenting or withdrawing consent, may adversely affect certain features and functions.
Gestisci opzioni Gestisci servizi Gestisci fornitori Per saperne di più su questi scopi
View preferences
{title} {title} {title}